A patient couldn’t open his mouth wide after a dental procedure. He was referred to see a surgeon for the temporomandibular joint (TMJ/jaw). There was no significant swelling, inflamation in the teeth and the TMJ. But he felt his jaw was locked ilke he couldn’t open his mouth normally, very limited, shown as below in the photos. 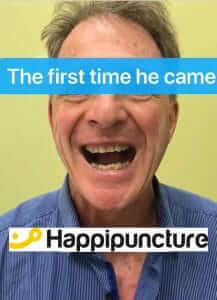 Then he had a mild sugery around the TMJ in order to help the range of motion of his jaw. Weeks later, he didn’t feel improvement and still couldn’t open his mouth properly. What’s worse, he couldn’t go back to get his second dental treatment (putting a new crown on) done as he couldn’t open his mouth enough. He was struggling with wearing a temporary crown and could only eat with one side for weeks.
When he first came to me, the range of motion of his jaw was very restricted. He felt tender in TMJ but not much swelling or pain. He could move his jaw side to side, but up and down was not satisfactory. After some checks, I saw it as TMJ disorders.
The exact cause of TMJ diorder is often difficult to determine. It could be physical injury, overuse, chronic grinding or clenching of teeth, stress, anxiety, etc. Some might have more pain in jaw joint, while some have restricted movements rather than pain.
My treatment plan for him was:
6-10 acupuncture treatments, combined with flash cupping/ seed-sized moxibustion;
2 sessions/week;
self-care jaw functional exercises twice/day.
In the meantime, he also had some stress from work, cravings for suger and salt, loose bowel motion, wiry pulse, light red tongue with yellow thick coating. These symtoms are closely related to liver and gall bladder in Chinese medicine. And TMJ acutally lies on hand/foot Shaoyang Sanjiao/gall bladder Meridians.
By treating a patient holistically, the result would usually be much better than just treating problems locally or separately. That’s one of the biggest differences between dry needling and traditional Chinese acupuncture.
After every acupuncture treatment, he felt improvement and made progress. And after 6 sessions, he could open up his mouth wide enough to go back to get his new crown done! 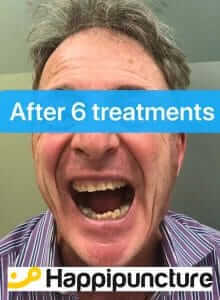 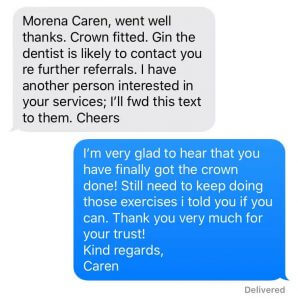 It was his first time to try acupuncture. He feels amazed by how acupuncture and Chinese medicine helps not only his jaw but also his digestive system and stress. And in this case, compared to the sugery (which cost him more than $2000), six sessions of Chinese holistical treatments (less than $550) are much more economical and painless without side effects.